Tyler was diagnosed with bilateral retinoblastoma (eye cancer) on February 15, 2011 at 2 months old.

After six months of systemic chemotherapy and a year of laser and cryotherapy (freezing treatment), the cancer in Tyler’s right eye had been destroyed. Sadly, tiny tumors (seeds) in his left eye were too difficult to overcome, and his eye was removed on July 12, 2012 to protect his life. Tyler received his prosthetic eye 6 weeks later and it looks amazing! Most people can’t even tell it’s fake!

At Tyler’s most recent EUA in September 2013 his eyes looked perfect and the doctor believes he will have 20/20 in his right eye. 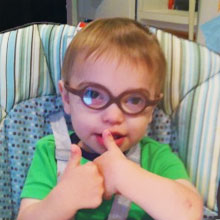 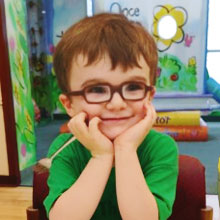 Help us to make a difference!